I recently purchased The Early Life and Public Career of James A. Garfield from a used bookstore in Grand Rapids. Flipping through it, I found a fascinating story about James Garfield facing down slavers in Kentucky during the Civil War.

Before you read the story, it’s helpful to get a little background.

James Garfield was born into a farming family in Ohio. Like Abraham Lincoln, Garfield was too ambitious to stay on the farm.  Garfield managed to obtain a respectable education and would eventually pass the Ohio bar exam.

Garfield developed an interest in politics and was an anti-slavery Republican. After the outbreak of war, Garfield organized an Ohio regiment. He would eventually rise to the rank of major general. Notably, Garfield was Major General Rosecrans’s chief of staff for the battle of Chickamauga.

Garfield was elected to the U.S. House of Representatives while he was far away from home fighting the war. With the blessing of his superiors, Garfield resigned from the army. While traveling north after the battle of Chickamauga, Garfield encountered the aforementioned slavers. The details of that encounter are provided below. 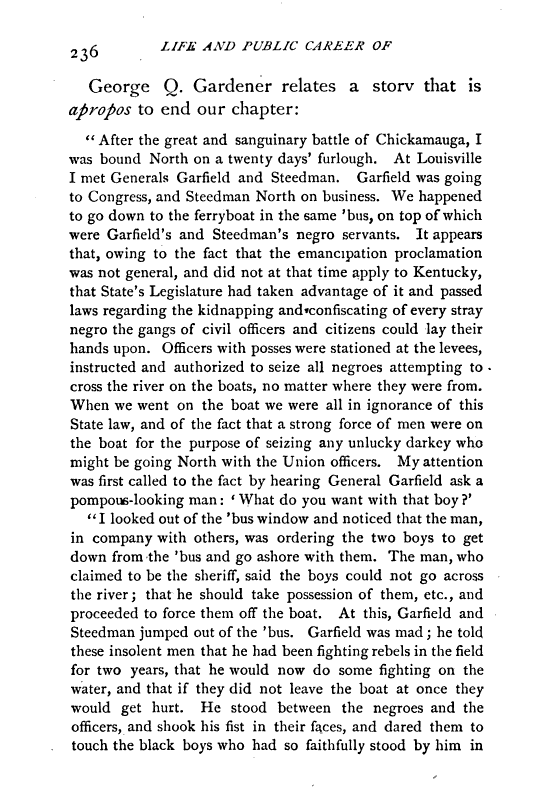 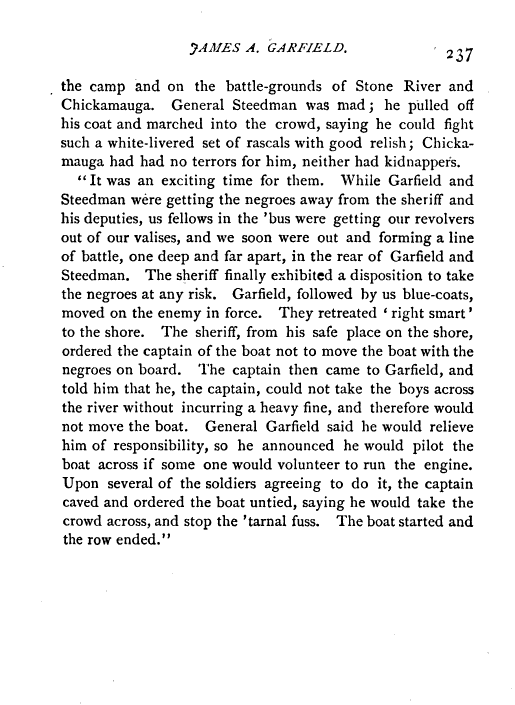 James Sanks Brisbin, The Early Life and Public Career of James A. Garfield: Including Also a Sketch of the Life of Chester A. Arthur 236-37 (1880).

This brief story is so interesting because it not only displays Garfield’s courage, but it also reveals the dark reality of slavery in the northern states. The author correctly notes that the Emancipation Proclamation did not apply in Kentucky. The executive order only applied to slave states that were in open rebellion.

Garfield, of course, was no saint, but I appreciate his war service, anti-slavery views, and sound-money politics.

For an interesting look at the life and death of President James Garfield, I recommend the “American Experience” episode “Murder of a President.”