Rod Dreher is the conservative author who wrote the book that started this great war. 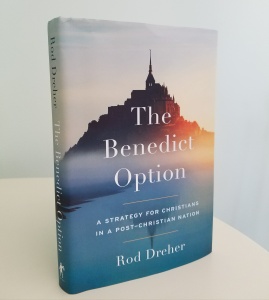 Well, it hasn’t exactly been a war, but the nasty tweets, reviews, and blog posts have been whizzing like bullets. The point of controversy is Rod Dreher’s book The Benedict Option: A Strategy for Christians in a Post-Christian Nation. The episode has undoubtedly been good for traffic, sales, and small group discussions.

In some ways, the Benedict Option (“Ben Op”) controversy is surprising and unexpected. Dreher has been hashing out the Ben Op for a number of years now. If you’re unfamiliar with the Ben Op, I encourage you to read Dreher’s article “Benedict Option FAQ” from 2015. Dreher provides a succinct definition.

The “Benedict Option” refers to Christians in the contemporary West who cease to identify the continuation of civility and moral community with the maintenance of American empire, and who therefore are keen to construct local forms of community as loci of Christian resistance against what the empire represents. Put less grandly, the Benedict Option — or “Ben Op” — is an umbrella term for Christians who accept [Alasdair] MacIntyre’s critique of modernity, and who also recognize that forming Christians who live out Christianity according to Great Tradition requires embedding within communities and institutions dedicated to that formation.

If the Ben Op is about intentional Christian community, there isn’t much reason for a controversy here.

Why are some Christians choosing the Ben Op?

Rod Dreher answers this question in the first chapter of The Benedict Option. The opening chapter lacks nuance, but hits on the important points. Christianity and organized religion in general are losing market share. Dreher writes that “[h]ostile secular nihilism has won the day in our nation’s government, and the culture has turned powerfully against traditional Christians. We tell ourselves that these developments have been imposed by a liberal elite, because we find the truth intolerable: The American people, either actively or passively, approve.” Rod Dreher, The Benedict Option: A Strategy for Christians in a Post-Christian Nation 9 (2017).

Furthermore, orthodox Christians have lost a significant amount of cultural sway and influence. See the short-sighted and desperate endorsements of Donald J. Trump. The barbarians aren’t just at the gates, they’re running our institutions, policing our culture, and creating Amazon Original Series. Whether we like it or not, according to Dreher, our kids are steeped in a framework that is antithetical to orthodox Christianity.

If you’ve read Alasdair MacIntyre’s book After Virtue: A Study in Moral Theory or Charles Taylor’s Sources of the Self, then I don’t think Dreher’s diagnosis of our culture should surprise you. I’m nothing more than an armchair philosopher, but even I know that there are irreconcilable differences in our society. We protest because we can’t reason together.

Dreher relies on MacIntyre’s definition of “emotivism” to describe our moral framework. MacIntyre defines [e]motivism as “the doctrine that all evaluative judgments and more specifically all moral judgments are nothing but (emphasis in original) expressions of preference, expressions of attitude or feeling, insofar as they are moral or evaluative in character.” Alasdair MacIntyre, After Virtue: A Study in Moral Theory Second Edition 11-12 (1984).

We’re all emotivists to some degree. When we hear someone talk in absolutist terms about morality or right living, our immediate reaction is to dismiss the speaker as terribly naive. Surely there is a defeater for every moral framework. At least, that’s what we’re taught. Don’t judge because your neighbor’s moral preference is just as valid, warranted, and true as yours. Emotivism is not found in orthodox Christianity, but we can’t avoid being influenced by our environment.

Chapter two of The Benedict Option tries to explain why we’re all emotivists. Dreher provides a tl;dr summary of 2000 years in the West. It’s what you would expect in a popular-level book. This chapter is fine if you want a partisan historical survey. If this sort of thing interests you at all, go read Charles Taylor.

In chapter three, Dreher recounts his visit to the Monastery of St. Benedict and describes Benedict’s Rule. The Benedictines do not live according to the harm principle. No, life in the monastery is strictly regulated.

By living out a life of order, prayer, work, etc., the Benedictines orient their lives around a specific telos and vision of the good. The Ben Op isn’t just about running away. It’s about forming character and thriving in Christian community. “The way of Saint Benedict is not an escape from the real world but a way to see that world and dwell in it as it truly is.” Dreher, The Benedict Option at 77. The Benedictine community is not a Sunday morning social gathering.

What about the rest of us?

Dreher knows full well that most of us are not going to join a religious order as exacting as the Benedictine Order. Throughout the rest of the book, Dreher uses anecdotes to illustrate the practical application of the Ben Op by average, orthodox Christians in the United States.

I enjoyed the story of Lance Kinzer, a former state legislator, who focused on renewal at his church. Kinzer, a member of a PCA church in Kansas, taught a class on Augustine’s City of God and encouraged members to explore the riches of the Reformed tradition. Kinzer provided some prudential guidelines for Christian engagement in politics in the post GWB-Obama era.

As a Dutch Reformed guy, I find Dreher’s point here entirely uncontroversial. The first one hundred years of the CRCNA is a case study in thick communities that connected culture, church, and school. I recently read J. Gresham Machen’s, Christianity and Liberalism. Machen, who was something of a libertarian, made a similar point about public education. Machen thought that public schools, and state laws that threatened alternative forms of education, were antithetical to liberty and Christianity.

One final point to mention here is how Christians pursue Ben Op living when it comes to sexuality. Dreher lists the sexual revolution as an epochal event in the West. I don’t know if I’d go that far, but our culture’s re-education project on human sexuality is insidious. Christians in the first and second centuries lived peculiar lives marked by a strict sexual ethic. This was part of the Christian witness. The Apostle Paul repeatedly listed sexual immorality among the public sins from which Christians must flee.

I think the critics who are scandalized by Dreher’s call to fight pornography with everything we have and to reject the world’s definition of sexual freedom are missing the point. The Christian witness on sex is not the gospel. Dreher himself would say that. Nonetheless, a peculiar and wholesome sexual ethic is an essential part of Christian living.

The Benedict Option is not perfect. It’s true that the overall theme of the book focuses on the experience of white Christians in the West. In contrast, minority communities have been living out the Ben Op since, well, forever. As a retort to this criticism, I think Dreher would say that our current culture is more hostile to all Christian communities.

Additionally, you must account for the fact that Dreher comes from an Eastern Orthodox background. I wouldn’t have chosen a monastic order as the archetype of my book. I can’t follow Dreher everywhere because I affirm the Reformed confessions. Nonetheless, I agree with Dreher and Machen that Confessional Protestants, Orthodox believers, and Roman Catholics are bound together by core essentials. The book is written for small “o” orthodox Christians.

I enjoyed The Benedict Option, and I’m not very sympathetic to its critics. This is a book written to a general audience. There are many helpful anecdotes and strategies. I’m all for little Christian platoons and mediating institutions that focus on faith formation and Christian living. None of this takes away from the Great Commission to preach the gospel to all the world. In some respects, this is exactly the Dutch Reformed model. Dreher and Kuyper are allies, not enemies.